Windhorse is a concept that comes from the shamanic traditions of Tibet, Mongolia, and other areas of Asia. Basically it’s meaning is life force, or soul. Though incorporated into Buddhism now, the windhorse predates it.

It also is connected with good fortune or good energy, the basic goodness inherent in humans. People do various practices of an inner nature to ”raise their windhorse”, or to gather positive life force to cope with the ups and downs of life. (By this I mean meditation or prayer or sacred awareness, or anything that raises your windhorse energy.)

Given how important the horse was (is) to the nomadic shamanic peoples of this area of the world, it is no wonder they chose the windhorse as the symbol of that which is strong enough and fast enough to carry prayers to heaven. 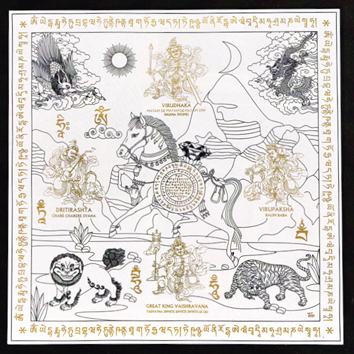 The windhorse is associated with 4 other symbolic animals – Garuda the eagle, the dragon, the lion and the tiger.

Windhorse energy is upliftment, creating flow out of stagnation, clearing off inner clutter or obstacle so that one flows with ease again.

I am not going to claim I know much about windhorse, I only ever heard about it via some vague mentions while scanning Chogyam Trungpa’s work, but long before I heard of it, I have used a contemplation to free myself from tension and darkness. At night, while about to drift off to sleep, I imagine myself putting on the olden time clothing necessary for travel on horseback and then saddling and riding a large white horse all along an undisturbed coastline, with dark hills and forests in to one side and the vast moonlit ocean out to the other.  Sometimes I am on cliff tops, sometimes on the beach, sometimes I venture inland.The landscape is primordial – there are no roads or houses or markers of modern civilisation, though occasionally there are small villages, or caves, or huts. I might arrive at such a plac e – a place out of the way-  and stable the horse with me, in comfort and then go to sleep. The horse is always nearby. Perhaps others will find it a useful meditation or adapt it to suit their own imagination and inner world. That white horse came to me first at a  time of severe troubles, so I trust it as a symbol.

The word lungta (ཀླུང་རྟ་, klung rta) is composed of two syllables: the first, lung, represents the element ‘space’ in the fivefold classification of the elements ‘earth, water, fire, air and space’ and signifies ‘universal foundation’ or ‘omnipervasiveness’. The second syllable ta (horse) refers to the ‘excellent horse’ (རྟ་མཆོག་, rta mchog), and since in ancient times in Tibet the horse was the symbol of travelling with the greatest speed, in this case it seems to refer to the transmutation of every thing that depends on the five elements from negative to positive, from bad to good, from misfortune to good fortune, from baleful portents to auspicious signs, from poverty to prosperity, and it implies that this should ensue with the greatest speed.