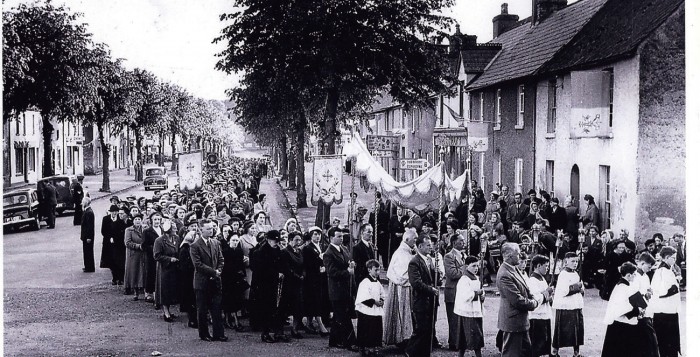 There was never any rush of fury or disgust; it was a very gradual and imperceptible hollowing. A soft turning away.

I was born into a place steeped in Catholicism.  The whole of our lives was saturated with its atmosphere. It coursed through my blood as a natural force. The Sacred Heart presided on the wall above our table.  Aunts unselfconsciously fumbled with rosary beads and prayer books, Uncles who smelled vaguely of drink stood sternly at the back of the Church, and my Mother had the nose worn off her statue of St. Martin de Porres from ceaselessly rubbing it while praying for us children.

Into this river I tumbled and from the outset was a fervent believer. My Catholicism was spiced with my Grandmother’s innate paganism, so that magic and the occult was readily apprehensible. She had instilled in me from the earliest days an awareness of fairies and spirits. When it was discovered that I was wandering as a six year old to an abandoned Protestant graveyard to lie with my eyes closed on the cold stone slabs and drift blissfully on the scent of the Yews, she went out of her way to put the fear of the devil in me. After too much sherry she would recite the endless verses of the Green Eyed God of Kathmandu and my fine hairs prickled. When statues started to move around the country I stood with her amid crowds in rural fields, and her grip on my hand grew ever tighter as the passion mounted. Her face was flushed, she mumbled incantations.  Because of her I believed in everything I was told.

An old nun could squeeze her beads so that it looked like she was crushing them with the power of her prayer. There were two priests who I was convinced were the same person; they occupied one body and simply took on different names on different days. Mighty forces were chained within the tabernacle. Secretly I dipped my fingertips into the melted wax of votive candles and felt consecrated. The repeating chime of the invisible bell during the ritual of transubstantiation sent shivers up my spine. I was caught up like any voodoo child in the zeal of the annual Corpus Christi procession that passed through our town and I felt similarly elated to watch my aunt becoming a Bride of Christ. For years I slept on my back with my hands joined on my chest, because of a terror of turning my face from God. I saw nuns who had seemed to me so strict and masculine became blushing girls when the Bishop entered the room. There was an awe in the groan of Church pews. A bewilderment in Frankincense. Between the vast acreage of Heaven and the unplumbable depths of Hell, I felt secure.

There were very good nuns and priests and brothers, who genuinely took an interest in me and were kindly spiritual helpers. One lady was an archetypal force, and she ripped my excellent crochet work to the first stitch every Friday morning to teach me that I had to learn how to deal with some failure and frustration in life. She explained this to me with great sincerity when she found me weeping in the bicycle shed.  My kid brother however was regularly feeling the weight of the strap in his school. Our newly arrived and incredibly handsome young priest had sex with the choir leader and this confused me as a girl, because as far as I was concerned  his wicked lover was far too plain! I moved into the secondary school and now our classrooms were the converted dormitories of what had once  been a Magdalene laundry, and I could sense the lives of those girls.

Two moments stand out, not that they directly pushed me away, but because they remain so clear in my memory as significant blows.  One concerned my auntie. She had incubated a hatred of a neighbour, and indeed the neighbour was a devious witch. One Sunday after Mass as the congregation converged to leave the Church this neighbour tripped and fell in the aisle. Without hesitation my auntie stepped over her body.  My whole being reacted with shame. The other concerned my father. The priest was on the step in front of the altar handing out Communion. All at once his white chasuble was engulfed in flames. The line of communicants drew back. One man ran forwards and beat energetically at the flames with his bare hands until the fire was put out. It was an extraordinary sight, the white clad cleric with the sheet of fire roaring above his head and the dark-suited hero sacrificing his skin. When my father came back to stand beside me I saw how his hands were covered in burns and bits of charred cloth. He clasped them in front of his belly. No-one came to say thanks. Suddenly I could tell the two priests apart. They looked nothing alike.

There were no more dramatic moments, no omens, but the occult blaze that had impregnated my being was somehow dwindling. When my friend committed suicide at 15, some gouger stole my bicycle – the tool that ensured my freedom  – from outside his funeral Mass and I took this as a curse. I joined a Catholic youth group and spent my Sunday mornings visiting elderly people in an Old Folks Home, where addled men sat helplessly naked from the waist down, their testicles like strange fruit on the seat between their legs. I met old women there, their toothless mouths gaping up at me like the open beaks of  raw, bald chicks in a nest, women who had been living in the home since their early teens because they had made love once or twice and been punished forever.

I did not lapse as such until I was just 17. It was a dreary, rain-soaked December Sunday and I was in my first year of University. Almost out of curiosity, to see if any flicker remained, I went to an unknown Church in a Dublin suburb to hear a Mass.  The crowd was grim, grey faced and unfriendly. The priest droned, his words made no imprint on me. The building echoed like a shell.  I waited until it had emptied, and then I left.

There was never any feeling of acrimony, no decisive jolt. To lapse means to slip, to glide. It can be silent and graceful, like silk floating away. When companions railed violently against the church – which was very often – I flinched at their blasphemy. Their cult-like hatred seemed to me to be a lower form of religiosity. I was free of any negative adjudication. The flow had simply stopped. It was not a decision. The stories of the rampant buggery of small boys in industrial schools was horrifying, of course, but I knew that bankers and school-masters and pillars of the community climbed on top of their children too in the secrecy of the night, and so the taint of evil was in humanity. I was furious about the pregnant girls confined to convents, their babies stolen, or malnourished and buried in underground caverns – but my fury was equally directed towards their own mothers and fathers who had swallowed their native love and hounded them out of their homes.  The last Mass had simply been devoid of God, it was no great moment; and anyway  I had already by then laid my hands by chance on the books of Alexander David-Neel. From the ashes of my past my young mind was being kindled with faraway philosophies and vaulting skies, turning inexorably towards my grandmother’s green-eyed gods. It took more than three decades before I had the curiosity to turn around again and enquire if there was something sacred still glowing in the hearth.