(The Phrygian ‘liberty cap’, from Phrygia, the Balkans and Eastern Europe, was associated with the later Pileus cap of the freed slaves.)

The Pileus is a peaked, felt cap, like the hat we imagine that elves might wear. It originated in Ancient Greece as a sailor’s hat, but was associated more commonly with Rome later on. It was a hat given to slaves who had been freed. their hair was shorn and the cap was to symbolise their liberty.

The shape is also symbolic of the egg from which Castor and Pollux were supposed to have been hatched, and further represents the enslaved person hatching into freedom.

The Pileus became linked to the idea of liberty and the Republic, as opposed to the crown which symbolised monarchy. Varieties of this peaked cap have been associated with revolutionary movements down through the ages and all over the globe. 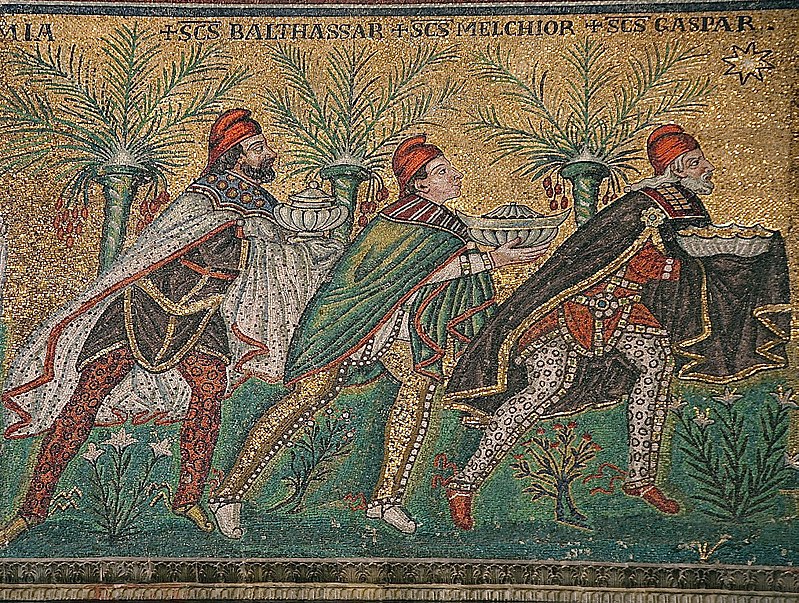 Phrygian caps and the Pelius are often inter-associated. In this 6th century art work the Magi are depicted as wearing Phrygian caps.

Ordinary citizens took to wearing the Pileus hat at Saturnalia, to symbolise their own brief period of freedom and liberty from the constraints of the norm during the dark, winter days of Saturnalia. Ad pilleos vocare means “to set free.”  It also signified the upending of the traditional roles of master and slave that occurred during Saturnalia, with people inter-changing their status. Feasting, gifts, games, back chat from children and servants, intoxication, these were the hallmarks of Saturnalia.

TO ROME, IN SATURNALIA

In these festive days of the scythe-bearing old man (Saturn),

when the dice-box rules supreme,

you will permit me, I feel assured,

to sport in unlaboured verse.

You smile: I may do so then,

and am not forbidden.

We should all have a Pileus in our wardrobe. I made  this today from a strip of a thin blanket. It took about 30 minutes…Just make (sew) a tube that fits your head and then cut back in a curve from the front (quite high up- leave your hat space!), veering more into  a small rounded peak before you meet the back seam, and sew on the inside..

''I am all pervasive. I am without any attributes, and without any form. I have neither attachment to the world, nor to liberation. I have no wishes for anything because I am everything, everywhere, every time, always in equilibrium. I am indeed, That eternal knowing and bliss, Shiva, love and pure consciousness.''
Meta
Loading Comments...
%d bloggers like this: