Home › Uncategorized › The Temple Is Infested!

The Temple Is Infested!

She drew open the gate of the compound and the stooped monk came in. His step was slow and shuffling, as if his journey was long. Following in his wake were four attendants, dressed in similar robes, but somehow nondescript compared to their master.  The old man’s head was shrunken, his long grey hair was sparse, he was poised like a shrivelled hawk. The group made their way towards the central fire pit and half-encircled it, sitting themselves cross-legged onto the ground. She served them tea.

For many hours thereafter the master held forth, in a quiet insistent tone, on things of inexpressible import, and so intense were his words and his directions that she felt herself gradually exhausted from the load of it all, and she could barely stay alert. His attendants sat quietly, upright, two on either side of him, their robes clutched closely round their bodies against the night chill. They were ready to serve their master should he require them.

The night drew on. He was the most solemn one in the world, he had all of the answers.  She wanted to lay her problem at his feet. He would surely be sympathetic, this wise old man.

Finally, taking her chance in a moment of silence, she blurted it out. The words caused her so much frustration that as she spoke them she raised her hands, tightened like claws, in front of her eyes. ”I am tormented by endless circling thoughts,” she rasped, ”They give me no rest.” She squinted hopefully past her clenching towards the master.

To her shock he erupted immediately into high-pitched laughter, a hyena-like  bawl that made him appear to be more akin to a detestable snaggle-toothed aghori than to the mild monk he had been but moments before. He threw his wizened head back and howled long and hard towards the stars. Worse still his stupid, upstart companions were also falling about in amusement, clutching their bellies. They whacked each other’s arms and thighs and whispered her words hoarsely into each other’s ears, spurring themselves to ever higher raptures of fun.

She waited in shame until they could gather their senses and, after an age, the old man reined in his smirk. He pointed his skinny forefinger in her direction, and said, ”You have allowed your temple to become infested by stupid monkeys!”

A vision flitted across the space behind her eyes. She saw a beautiful white temple, the usual beehive dome with a finely peaked roof. It appeared to be formed out of marble or bone. It was comprised of a tiny inner sanctum, room enough only for one or two persons at most to sit in the dark, and a small outer porch open to the elements. It could have been a pretty place with its stucco embellishments. The walls were finely carved.  All over the outer portions of this temple, however, innumerable monkeys crawled. They structure heaved with them, like maggots feasting on meat. They clambered and swung about on the roof and pissed everywhere at will. They dropped their faeces along the walls and littered the ground. They snarled and hissed at each other non-stop, and engaged in shrieking battles where they clawed each other’s skin and ripped their faces and then they tumbled bawling to the ground where they rolled in their shit.  Here and there they assaulted each other sexually, brief violent ruttings that caused only pain. Inside the sanctum, a whole sleepy horde had set up home and they wallowed and nested and lay on each other morosely in their heaped up dirt. The stench was unbearable.  Beyond the temple’s boundaries enemy troops of warring monkeys made attempts to claim the ground from the incumbents. Skirmishes were ferocious, the attacking monkeys often drawing blood. The whole scene was an inferno.  A vision of hell. She understood that the embattled temple was her own mind.

”What am I supposed to do about the monkeys?” she quietly asked.

”Beat them!” said the old monk.  He had a look of calm ferocity in the set of his eyes. ”Take a hold of your biggest broom and whack at them hard. Chase them all off. Rout those demons.  Scream battle cries that will freeze their blood.  Bare your teeth and hiss at them more fiercely than they hiss at you. Growl with primordial rage. Be absolutely merciless.”

She could see herself doing this, whirling about in a savage assault on the invaders, but then she also saw how the monkeys could turn on her, gang up on her if they chose, grow brazen and become a danger. They could threaten her life.

”Shoot them dead with your gun.”

She was taken aback. ”You mean, take a life? Kill another living creature!”

For a few moments she hesitated and then saw herself shooting one of the snarling monkeys. She saw how it dropped to the ground.

”What do I do now with the body?” she asked the monk. She could see the animal’s wretched corpse.

”Build a pyre and burn it,” replied the monk. ”And another and another, and build as many pyres as you need until the monkeys have fled.”

This seemed a gory, gruesome process but she could suddenly see his sense. The alternative was too obscene. It was to abandon the sacred space to the barbarians. To slink off in defeat.  First the monkeys would take this temple, if she allowed them, then they would maraud the whole hillside and all the homes and sanctums thereon, and thereafter they would establish themselves as colonies  in the metropolis, swinging from building to great building, claiming and desecrating all the libraries and galleries and public monuments,  ripping up the sacred scrolls, defiling the artworks. Not a single inch of ground would be spared. The whole Universe would be infested.

The monk spoke again. ”When you have chased them from your temple, go out with your big-headed broom even further into the forest and the jungle around you. Patrol on the mountain side and whack and chase and rout the hidden tribes of monkeys, who are waiting, silent in the bushes, for your next moment of weakness to make an attack. Clear the whole environment. The monkeys should be sent packing to the far distant hills, where there are no people, where there are no temples, where they can live in peace and explore their own nature.”

She thought about this for a while. The monkeys in her temple seemed to have quietened, almost as if they had heard the terrible news. They drew back from the gleaming bone walls and dropped to the ground. On their bellies they slunk off in fright and made for the trees. When she looked up at the old monk he was holding out his cup and asking for tea.

Note – The monkeys  who inhabit the temples in India are not always cute at all; they can be very aggressive and dangerous, especially when they are in rural places and are not acclimatised to people.  In some of the monkey temples, where they are held to be sacred, they are usually well fed and docile enough. But in abandoned temples in the forests if the monkeys have made it their home they will more likely bare their teeth,  and charge at curious visitors to chase them away. In cities a monkey visiting your balcony may steal your stuff, grab your food brazenly from your plate and urinate scornfully on you from the roof.

Monkey Mind is a term used in eastern philosophy to describe the untamed consciousness. Hanuman, the monkey god, is also worshipped for his heroism, devotion and strength. It’s a paradoxical world! 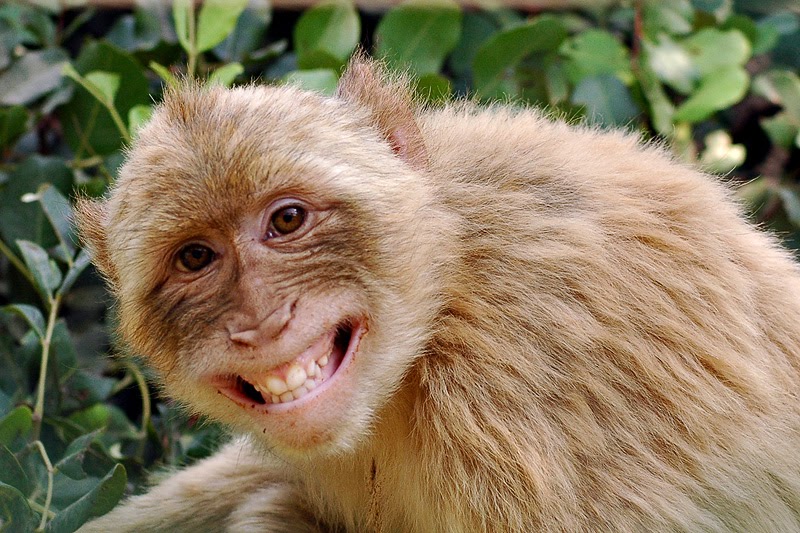