Home › Books and Literature › The Empress ~ From Meditations on the Tarot

The Empress ~ From Meditations on the Tarot

Some Extracts from Tomberg’s work. All magic, including sorcery, is the putting into practice of this: that the subtle rules the dense. Her crown, sceptre and shield (coat-of-arms) are the three instruments of the exercise of this power. The crowned head indicates the power of the Divine over consciousness; the right arm, which bears a sceptre topped by a cross mounted on a globe of gold, represents the power of consciousness over force; and the left arm, which carries a shield bearing an eagle, signifies the power of energy over matter or the volatile over the gross.

The crown is the divine authorisation of magic. It is only magic crowned from above which is not usurpatory. The crown is that which renders it legitimate. The sceptre is magical power. It is by virtue of the sceptre that she is not impotent. The shield bearing the eagle shows the aim of magical power; it is its emblem and its motto, which reads: “Liberation in order to ascend”. And the steady throne on which the Empress is seated symbolises the indisputable and inalienable place which belongs to magic in spiritual, psychic and natural life —thanks to divine authorisation or the crown, to the reality of her power or the sceptre, and to that which she has as her objective or the shield. This is the role of magic in the world. Love is active wherever it exists. It is everyone’s vocation; it is no one’s prerogative. Thus, it is clear … that gnosis due to mystical experience must precede sacred magic. This is the meaning of the crown that the Empress wears. Sacred magic is the child of mysticism and gnosis. The aim of sacred magic, as we have said, is represented by the shield that the Empress holds in place of the book which the High Priestess holds. Sacred gnosis has as its aim the communicable expression (or “book”) of mystical revelation, whilst the aim of sacred magic is liberating action, i.e. the restoration of freedom to beings who have partially or totally lost it. The eagle in flight depicted on the shield signifies this emblem of sacred magic, which could thus be formulated: “Give freedom to he who is enslaved.”

Love, hope and faith are at one and the same time the essence of mysticism, gnosis and sacred magic. FAITH is the source of magic power and all the miracles spoken of in the Gospels are attributable to it. The revelation — all the revelations of gnosis have only one aim: to give, to maintain and to increase HOPE. The book that the High Priestess holds on her knees is written so that hope may continue unceasingly. For all revelation which does not give hope is useless and superfluous.

The Arcanum of sacred magic, the Empress, calls …. us to the way of regeneration, instead of that of degeneration. It invites us to de-mechanise all that which has become solely intellectual, aesthetic and moral technique. One has to de-mechanise in order to become a mage. 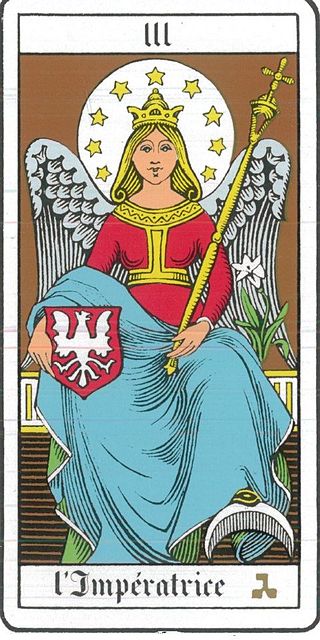 Posted in Books and Literature, Uncategorized