“The mighty choirs who extol Kybele on the mountain tops.” ~ Aristophanes

By chance I discovered Kibela while I was away. The last quiet village on the Black Sea sounded like the very place I wanted to go, and when I got there I googled the history of the place and discovered that it was the centre of worship for Kibela, a fierce Phrygian Goddess I had never heard of before. Neither had the locals it seemed and they could tell me nothing about her. The cave temple of Kibela is on Lake Durankulak, and as I cycled along the small sandy strip of land dividing the lake from the Black Sea I thought what a perfect place for the Mother of All Goddesses, as she was known, to have been worshipped.It is a peaceful, beautiful place full of wild flowers. She was also known as Mountain Mother (though there are no mountain nearby to the area), The Great Mother, The Mother of the Gods.

The statue of her discovered on Lake Durankulak is from about 5000 BC and is described as depicting a ” robust woman, physically healthy, with her genitals well – indicated, with strong legs, while the breasts, head and arms are much less overt – only barely distinguished. ” Nearby are the ruins of the largest necropolis discovered on the continent. The area is known by archaeologists as the ”Bulgarian Troy.”

Phrygia was part of Anatolia, in what is now Turkey. It is interesting that she is likely related to the exciting archaeological discoveries that are emerging all the time from Catalhoyuk, in Turkey. 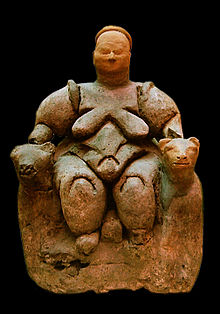 (Kibela) is an Anatolian mother goddess; she may have a possible precursor in the earliest neolithic at Çatalhöyük, where statues of obese women, sometimes sitting, have been found in excavations. She is Phrygia‘s only known goddess, and was probably its state deity. Her Phrygian cult was adopted and adapted by Greek colonists of Asia Minor and spread to mainland Greece and its more distant western colonies around the 6th century BC. (Wikipeda)

Kibela is known as Cybele in more modern history.

KYBELE (Cybele) was the great Phrygian mother of the gods, and goddess of motherhood, fertility and the mountain wilds.

Kybele was identified with a number of Greek goddesses including Rhea (in mainland Greece), Demeter (in Samothrake), Aphrodite (on Mt Ida) and Artemis (in Karia).

In sculpture she was depicted as a matronly woman with a turret-crown, seated on a throne flanked by lions.

The descriptions given by historians of the cult practices of Cybele (Kibela) remind me of the way historians often describe Kali rituals; one can sense the disapproval of the ancient writers, as they describe the eunuch priests, the frenzied music and dancing of the devotees, followed by cutting of their skin and blood letting as sacrifice.

“The Idaean Mother [Rhea-Kybele] summons from the terrible shrine the blood-stained Phrygian and makes him unconscious of his knife-hacked arms; he beats the holy pine-brands against his breast, and tosses his gory hair and deadens his wounds by running; all the country-side and the bespattered votary tree [i.e. Kybele’s sacred pine-tree] feels terror, and the panic-stricken lions rear the chariot high.” ~ Statius, Thebaid 10.

Mostly though the rites seem to have involved dancing and wild celebration….

“In the adorable presence of the mighty Meter Theon (Mother of the Gods aka Kibela), the prelude is the whirling of timbrels; there is also the ringing of rattles, and the torch that blazeth beneath the glowing pine-trees
There, too, are the loudly sounding laments of the Naides, and there the frenzied shouts of dancers are aroused, with the thong that tosseth the neck on high.” ~ Pindar, Dithyrambs Heracles the Bold

(Source for both above – http://www.theoi.com/Cult/KybeleCult.html)

The rites connect to the rebirth/ fertility rites of Dionysus, Attis, Adonis.