Not angry when abused, not happy when praised, a great blockhead of the universe! Going along as circumstances carry me—north, south, east, west, without hiding my ugliness and clumsiness between heaven and earth. 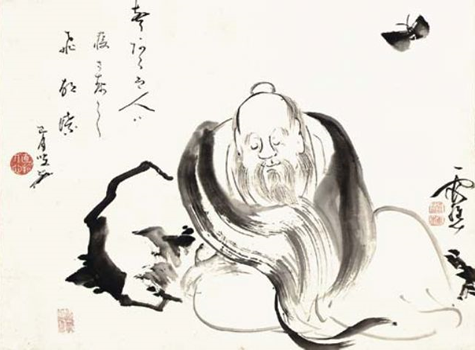 Bankei built himself a hermitage, completely isolated from contact with others and practiced zazen, a kind of sitting meditation, nearly continuously, until he had festering sores on his buttocks and legs.  By 1647, malnourished and sleep deprived, he also contracted tuberculosis.  A doctor was summoned but could do nothing and Bankei prepared to die, at which point :

I felt a strange sensation in my throat.  I spat against a wall.  A mass of black phlegm large as a
soapberry rolled down the side. … Suddenly, just at that moment, it came to me.  I realized what it
was that had escaped me until now : All things are perfectly resolved in the Unborn.

”Bankei’s main advice, given to everyone from rich aristocrats and menacing samurai to merchants, peasant farmers and children, was quite frequently and simply expressed as: “Abide as the Unborn.” “Don’t get ‘born!’” That is, don’t fall into identification as a “me,” a “Buddhist,” “enlightened,” “unenlightened,” “young,” “old,” etc. For instance, when a woman complained that her gender was a karmic obstacle, he retorted: “From what time did you become a woman?” So he taught the multitudes: let go all selfishness and bad habits—they’re not part of your Original Mind anyway, and just be at great ease in/as the Unborn Buddha-Mind.” ~ ‘Bankei Zen Master‘ From Bankei’s Song of the Original Mind ~

Unborn and imperishable is the original mind….

Search back to the time when you were born: you can’t remember a thing at all!

Keep your mind as it was when you came into the world, and instantly this very self is a living “thus-come-one” …

Clinging, craving and the like—I don’t have them on my mind. That’s why nowadays I can say the whole world is truly mine!

Thinking back over the past, you find it was an evening’s dream. Realize that, and you’ll see everything is just a lie….

Since, after all, this floating world is unreal, instead of holding onto things in your mind, go and sing!  …

When you don’t attach to things, the floating world will cease to be [as a separate, merely objective appearance]. Nothing is left, nothing at all.

When you do wrong, your mind’s the demon, there’s no hell to be found outside.

Abominating hell, longing for heaven, you make yourself suffer in a joyful world. …

Mysteries and miracles—there are no such things! But when you fail to understand, the world’s full of weird happenings.

This is the phantom [ego-mind] who deceives, who makes us take the false world to be real. …

Enlightenment and delusion too never existed at the start. They’re ideas that you picked up, things your parents never taught.

If you think the mind that attains enlightenment is “mine” your thoughts will wrestle, one with the other.

These days I’m not bothering about getting enlightenment all the time, and the result is that I wake up in the morning feeling fine! …

Nowadays … I just move along at my ease, letting he breath come and go.

Die—then live day and night within the world. Once you’ve done this, then you can hold the world right in your hand!

It’s the buddhas I feel sorry for; with all those ornaments they wear, they must be dazzled by the glare! …

The mind that’s not conditioned is originally unborn; what is conditioned doesn’t exist—that is why there’s no delusion.

Though the years may creep ahead, mind itself can never age. This mind that’s always just the same.

Wonderful! Marvelous! When you’ve searched and found at last the one who never will grow old—‘I alone!’

The Pure Land where one communes at peace is here and now, it’s not remote, millions and millions of leagues away.