The vajra tent is a protective space created (visualised) by practitioners, in Tibetan Buddhism.

The vajra tent has the shape of a dome and covers all the other layers of the sphere. It is formed from a crossed vajra. The four spokes of the vajras slope downwards, all the way to the ground. As before, any space is totally filled with tiny vajras. The tent covers the spokes of all the vajras, including those of the standing vajras, and looks like an iron helmet. At the summit is a blue vajra with outspread spokes. All around the perimeter of the tent blaze the fires of the end of time.

It almost has the shape of the Mongolian Yurt.

It is a protective circle, which forms a dome. The Vajra Tent is really a form of mandala which keeps out negative influences and distractions.

I read a story about a vajra tent in John Blofeld’s ”Boddhisattva of Compassion”.

”A visiting lama from Nepal, an Englishman by birth, told me of an incident that occurred when, one night during a visit to see his mother, he happened to share a bedroom with a boy in his early teens. So as not to draw unnecessary attention to himself he performed his evening yoga mentally and then composed himself for sleep. In the morning, the boy declared that waking several times he had noticed with amazement a covering of light over his room-mate’s bed and that, when at about midnight the lama had got up to relieve himself in the bathroom, the light had followed and returned with him. Now this boy knew nothing of Buddhism, and had no idea that a lama before going to sleep invokes and creates in his mind a ”vajra tent”, a protective covering that is held to remain in place until morning.” ~ John Blofeld ‘Boddhisattva of Compassion” 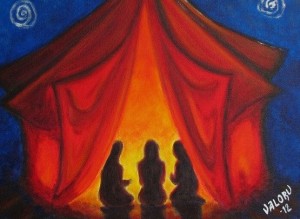