Bóann is a River Goddess of the Tuatha de Danann from Irish Mythology. Her mother was told to be Danú, the great Mother Goddess; her father, or Grandfather, was the Sea God, Manannan Mac Lír. Her story mirrors that of the faery Goddess, Sineán, wife of the first poet, Amergin, in that both females went to the Well of Ancient Knowledge, seeking wisdom and secret lore. These wells had a geis or spell on them that only certain people (that is – men) were allowed to come seeking the knowledge – but both these women refused to accept the taboo against female initiation.

Here Bóann is in the role of the biblical Eve, rebelling against authority. Don’t look in the Box, Pandora. Don’t eat the Fruit, Eve. Don’t drink from the Well, Bóann (or Sineán). For this exercise in defiance these women are ”punished” with various losses in this world, but Bóann now has access to wisdom from the Otherworld, and is gracious enough and compassionate enough to allow this secret wisdom to flow into our world.  Once the knowledge came up from the well, after all, it cannot flow back up the hill …it can not be returned to the secret well.

Bóann was at the time the wife of the king, Neachtan (or Nuada), who was the God of Water, and only he or his druids were allowed to approach the Well of Knowledge. Nine Hazel trees (The Tree of Knowledge?) surround this well and drop the Hazelnuts of wisdom into the water (Fruits of the Tree of Knowledge?) where they are consumed by the lurking salmon, who then embodies the secret wisdom. But Bóann was curious, and she circled the forbidden well – The Well of Segais – three times in an anti-clockwise direction chanting the mantra ”Amrun”.

Just as in the story of Sineán, Bóann was overwhelmed by the water which surged from the Well of Knowledge (apparently angered at having been summoned by a woman). Both are said to have lost their lives in the resulting flood, and the Rivers that have sprung up from the forbidden wells were named after them. In some stories, Bóann was instead maimed, losing an eye and a foot and a hand, gifts of the physical self she surrendered in return for the secret knowledge.

The Shannon was named for Sineán (Sionann), and the Boyne was named for Bóann.  The association of rivers and the ”flow of knowledge” reminds me that Saraswati, the Hindu Goddess of Knowledge and Wisdom, is also associated with a mythical river, the Sarasvati. Sineán and Bóann came in search of arcane knowledge and thereafter both became forever associated with great rivers.They both became Goddesses of Wisdom. They represent the burning desire for knowledge, a search that carries risk and danger and sacrifice, no doubt, but that no matter how it is suppressed will eventually always ”go to the well.”

It is interesting also a comparison between Ganga, the Goddess of the Ganges, and Bóann, for some say the Boyne is the Irish equivalent of the Ganges. Both Goddesses were willful, and both came to full actualisation as over-powering forces, and yet both live on, unlike the long dead Gods of their pantheons – their mighty rivers still flow, bringing fertility and life, and their creative inspiration remains. 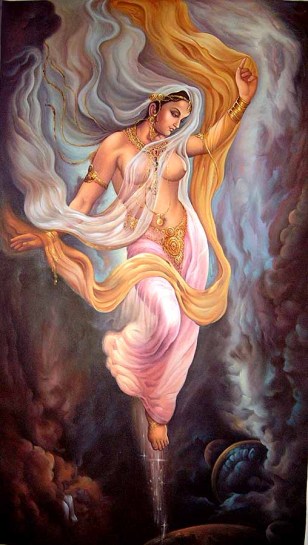 In some stories, Bóann manages to out run the raging water, surviving. In others, she shape-shifts into a salmon, thus becoming herself the Salmon of Knowledge, who will later be consumed by Fionn Mac Cumhail, warrior chief and sage of the Fianna. It is said, at any rate, that by this act of summoning up the Well, that she released the waters of knowledge for all people – and indeed the river is known now by her name and it is she, and not Nuada, who is associated with knowledge and inspiration. She is thus the Goddess of Spiritual Insight.

It is interesting that the stories of Bóann approaching the Well of Wisdom often describe her as prideful. These stories have been recorded by monks and scholars through the ages, and have been modified as time went on, reflecting cultural and social and gender mores. The scribes and monks, often tampered with the raw pagan imagery of the older tales, and set moral warnings into the stories that had never existed. Bóann is thus said to have gone to the well ”because noble pride uplifted her” or because she wished to wash off the stain of her adultery with the Dagda. These are both judgmental interpretations of her motives – and why would she in shame go to a well forbidden to her? She was more likely to be motivated by curiosity, or a sudden realisation that secret lore was not the preserve of solely the male. 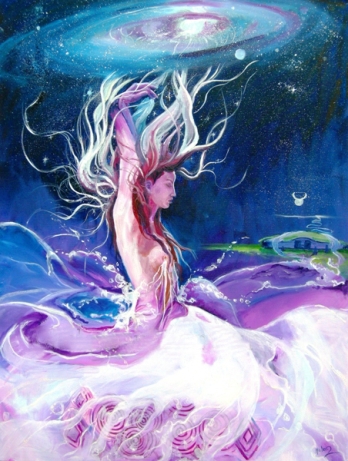 The word Bóann translates as ”White Cow”. The Celts like the Hindus worshipped the cow – as a symbol of endless bounty – and this white cow was considered a very good omen. She is also associated with the great river in the sky – The Milky Way – The Way of the White Cow. Bóann is also associated with the Moon – the old folk speech referred to the moon as a cow. The waxing moon was Bó Finn – the White Cow; the full moon was Bó Dearg – the Red Cow; the waning moon was Bó Donn – the Brown Cow; and the dark moon was Bó Orainn – the Dark Cow.  A gaulish version of Bóann is Bouvinda meaning ”illuminated cow”. (On an aside – not supported by any source – it reminds me of the name of Krishna – Govinda – which means ”Protector of the Cows”.) Bóann may also be associated with Damona – the White Cow Goddess, also a river Goddess, and Mother/consort of Apollo, who equivalates with the God of Love, and therefore, Aenghus Og, who was Bóann’s son.

Bóann is said to have been the lover of the Dagda, the primordial ”All Father” Good God of Gaelic lore, and that Aengus, the God of Love, was born of their union. It is said that she stopped time for her pregnancy, halting the Sun’s movement through the sky and making nine months seem like a day, so that Neachtan would not discover the truth. Here she is regarded then as a Goddess of Time. It is also told that Bóann was the wife of the Dagda (or the Dagda’s harpist) and gave birth to three sons, whose names described the three types of harp music –  the music that relieves pain and brings joy and happiness, the music that opens the heart and brings forth sadness, and finally the music that brings sleep and enchantment when exhausted.

Bóann is the Goddess of fertility, bounty, healing, study of the stars and astronomers. She is acknowledged as a muse and inspiration to poets. The five streams that formed the river that tried to overwhelm her are said to represent the five senses, and her ”death” was the ”shamanic death” of the knowledge seeker. The river engulfing her is symbolical of the need to be open to the five senses in order to maintain a hotline to poetic and artistic inspiration. But no matter her trials and tribulations, because she was immortal Sidhe, she could not be killed. Indeed in older times, she may have been venerated precisely because of her sacrifices on behalf of humankind – and it is only later, when she has become a hussy in the monks eyes for sleeping around, that she is killed by the surging of the River of Knowledge. She is said to be the Mother of that great archetypal Goddess, Brigid.