”Child, concepts are wild and stubborn, so remain mindful at all times.”

Much of what is taught in Yoga classes nowadays are recently invented postures or ways of moving/contorting the body. This is fine in general, after all moving the body generally is good. Evolving ideas generally are good. Claiming that these new poses have some arcane value, or are more special than your average jiggling, however, is a load of codswallop. Claims of special health coming from a special yogic point of view while getting knotted, or from the esoteric stimulation of nadis, is invented.

Yes, moving the body will bring benefit, but this is so whether one gardens, walks, kayaks, surfs, or does pilates, or even does some newfangled yogic athletics.

This does not mean I am not in favour of yoga, as, well, I am. Using movement as a meditation, or as a focus for concentration to still the mind, and create peacefulness, is always good. I am simply advocating against cultish worship of random movements that have basically been conjured out of thin air by aficionados. No harm in being wise.

Much of what we know today as modern Asana derived from an integration of various 19th century European/Scandinavian calisthenic movements and a nascent Indian nationalism movement that was rising at the time due to a desire for political independence.  Activists in that movement saw a generation of fit, supple bodies as a potential weapon, a potential army of warriors, in this cause.

Any yoga course I ever went on included a sizeable body of novel, so-called asana that were invented, distorted, adapted, designed and conjured by the presiding teacher. Not saying there is anything ”wrong” with it, but pointing out simply that this is elegant modern gymnastics, and not  Asana per se. These body movements have not been handed down faithfully from the Vedas and should have no more ‘spiritual’ authority than Jane Fonda’s workouts (which, incidentally, were quite good!). They are good for what they are, give them a whirl, but they ain’t all that. Do not experience self-loathing if the Downward Dog is not your forte!

Anyways, enough of the bitching. Asana was, in its original context, a relatively minor part of the overall vision of yoga, an aspect evolved with the primary aim of maintaining a flexible healthy body that could withstand the rigours of intensive meditation and an ascetic lifestyle. There was also a martial aspect, in that lone monks in isolated locations might have to defend themselves. From the point of view of health it is certainly good to move the body. But the earliest yogis were not that interested in their bodies, much less in keeping them super-sleek looking. They saw them as the instruments or vehicles for life experience and higher consciousness. Asana was a maintenance and repair service for the vehicle.

There is a body of older asana which goes way further back than the movements practised today in the global yoga culture, references to which we can find in medieval and even more ancient texts. Even this body of asana must be considered to be the result of evolving practices, as this is natural in all fields. They are not simply to be regarded as some divine revelation handed to Matsyendranath or another sage, that has to be held sacrosanct or worshipped. Although to be fair Matsyendranath and his ilk probably did have divine revelations…..but that’s another matter.

This is not a comprehensive listing of sources of older asana, it is just a brief look at some of the more familiar texts… (Someone who wants to relax instead of doing asanas….Rembrandt 1654)

Patanjali’s Yoga Sutras, written around the 2nd century BC to 3rd century AD, depending on who you trust, refer to Asana, but what is meant in this text is a steady, still, comfortable, sitting posture for meditation.

A tantric named Matsyendranath and his disciple Gorakhnath are credited with evolving a physical practice to complement meditative practices around the 10th century AD. But their practices were not written down.

The Dattatreya Yoga Shastras in the 13th century AD describe Mudra practices or inner muscular locks that would have been used in a sitting posture with the objective of directing energy.

The Hatha Yoga Pradipika was written in the 15th century AD, and the Asanas described in that work include about 15 postures in total. The text was based on older documents…

Approximate Images of these asanas….(Note a lot of the sitting poses look and are fairly similar)

Later works in the medieval period include Gherandha Samhita and Shiva Samhita, (Variously dated from 16th to 17th centuries AD)

There are eighty-four hundreds of thousands of Asanas described by Shiva. The postures are as many in number as there are numbers of species of living creatures in this universe. Among them eighty-four are the best; and among these eighty-four, thirty-two have been found useful for mankind in this world.
Gheranda Samhita 2.1-2

Approximate Images of most of these poses…..

Some additional practices are mentioned in Shiva Samhita but they are all variation of Siddhasana, which is basically the seated comfortable version of the Lotus Pose most are familiar with nowadays.  This posture can be seen represented in antiquity in some forms such as the Pashupati Seal  and the Gundestrup Cauldron, proving that spiritual discipline was a Universal pursuit. 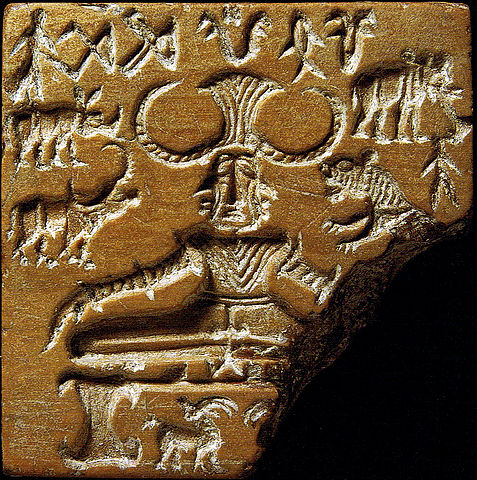 So, not to say that modern asana are not worthwhile. Just that they are often gymnastic and creative adaptations and do not require one to get spiritually wound up.