Home › The Shrine of Eris › Caetextia 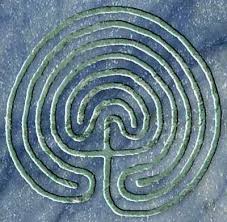 There’s loads of stuff out there about the left and right hemispheres of the brain, but I just wanted to post a bit on one particular theory I am coming across.

It concerns Caetextia, a term invented by the authors of ”Godhead – The Explosive Origin of Creativity, Mysticism and Mental Illness”  (Joe Griffin and Ivan Tyrell). The term Caetextia is the combination of the Latin words caecus meaning ‘blind’ and contextus  meaning ‘context’. Their theory is primarily concerned with autism and psychosis, but I find it interesting to extrapolate from it about the importance of being aware of CONTEXT with respect to whatever field of knowledge, art or mysticism we may pursue.

A quick summary of the theory is that while the cortex of our early ancestors was huge compared to other mammals, yet still we did not seem to progress culturally from making simple stone tools with techniques that remained pretty much the same for 2 and a half million years. Even when, 200,000 years ago, our species made an evolutionary leap, the tools of Neanderthals, and Homo Sapiens who eventually emerged from them, remained unchanged for another 150,000 years.

The point is that it seems that our ancestors were reacting instinctively to their world and lives, in an eternal present moment context. It is theorised by the writers that this is because our ancestors did not have waking access to REM states, and therefore had not developed a ‘self-concept’.

About 40,000 years ago a big evolutionary change happened and there was a sudden surge in creativity. Art, imagination, beautiful tools, and the organisation of trade. This adaptation, the writers claim, evolved because we consciously accessed the dreaming state, but in order to avoid psychotisism we had to simultaneously access the template for critical thinking. We had to be able to inhabit a ”mental theatre” escaping the limitations of time and space, so that we could imagine doing things in the future, reflect upon things that had happened in the past, anticipate and solve problems and think about the nature and meaning of reality, but we also had to ”parallel process” and put this abstract associative thought into a real-time context..

Springing from this adaptation is complex communication, all forms of creativity, development of and testing of hypotheses, unraveling cause and effect, mysticism, sharing of stories, skills and cultural innovations and so on…..

When we delve into this theatre of the mind we still need to maintain a solid sense of context, so that what we bring back does not overwhelm us. We have to be able to consciously pursue the storyline in the REM state.

We develop a concept of our selves by repeatedly going back into that REM state, with apurpose in mind. We process information, analyse, call on memory, get feedback. The agenda must be YOURS. There must be a healthy SELF CONCEPT. You have to raise the questions. Your curiosity must direct the search for meaning.

And this healthy self-concept which evolves in the LEFT brain hemisphere is a prerequisite for safely entering and returning from the REM state, which is a RIGHT brain specialization.

”If you continuously enter the REM theatre by, say, frequently mulling over your problems, and fail to steer the process by looking for an answer to something as Nature intended, you can end up worrying for prolonged periods. That form of rumination constitutes a risk factor for mental illness; depression, anxiety disorders, obsessions, addiction, or even losing contact with reality altogether- psychosis”

Some people seem to have  a genetic predisposition to access right brain REM states more easily. These people operate by ”associative thinking”. Nature was in this context trying to bring forth creativity, but the inherent risk is that if the creativity is not held in check by an equally powerful reasoning ability, the creative brain flounders, continually making one association after another, unable to prioritise or put a logical structure or context on their lives and inspirations.This can result in anxiety or psychosis.

”Many highly imaginative right-brained people who are vulnerable to psychotic thinking display caetextic tendencies which compromise their ability to connect to everyday living. Anyone involved in psychotherapy soon comes across such types ; emotionally intense, self-absorbed people whose strong imaginations are not moderated by their left brain. They spend much of the time disconnected from reality, pay only lip-service to reason, believe all sorts of inconsequential things that happen around them are deeply significant, are often eccentrically involved in ‘arts and crafts’, pseudo-mystical cults and eccentric practices around food and health. Despite showing undoubted signs of creativity, they find discriminating between good and bad work difficult and yet take their work intensely seriously, even when it is mediocre”

(I must admit this particular paragraph cooled my blood somewhat – yikes!)

For those left brain dominant people who have difficulty accessing REM states, the world can be bewildering, so they look for fixed ”rules” and systems i n order to make sense of their lives, and can be obsessional, dogmatic, pedantic, convinced that theirs is the only right way of doing things.People with Asperger’s syndrome often experience this in a noticeable way. While the explanation is confined to autistic types it occurred to me that it may also be applicable to people who allow them selves to become enslaved by modern post-industrial lifestyles, thinking hardly at all beyond the context and rules and demands of their daily workaday lives. Maybe?

It is proposed in the book that a present day culture that doesn’t encourage serious and thoughtful refection and fruitful discussion, that it is in other words dumbed down and highly emotional and reactive, may be leading to an increase in latent autistic tendencies.

Okay! I’m going to pause here for the moment because this is already far too long. 😉

For a bit of further info…http://www.caetextia.com