Home › Oddities › The Tree of Life and the Serpent

The Tree of Life and the Serpent

Tree and Serpent- A Global Story of Shared SYMBOLS.

‘’Prayag was viewed as the navel of the earth… just like Eridu, Delphi or Cuzco: the site of the primordial Mound which rose out of the waters……Here was an archaic pillar cult at the point where Heaven and Earth were first separated, and a sacred ‘undying’ tree like that at Eridu ..which was seen by Hsuan Tsang in 644AD; still alive in the 7th Century, it is now a stump only. ..Prayag stood on an island…and at the North end of the island (is) a shrine to the Primordial serpent who protected the eternal tree…’’

(In Search of the First Civilizations – Michael Wood)

I was reading this recently, and ended up thinking about how often this motif occurs in our planet’s shared mythology.

Leaving aside the deeper metaphysical interpretations, just for the moment, (Kundalini/Pineal,etc.etc.) I thought I’d look up some of the occurrences of this universal symbolism…Here are just a sprinkling. Please add others if you feel inclined ( I would appreciate it) or clarify examples given, especially the Sumerian story, as it is told so variously on the web that I cannot get a clear idea of it.

Symbolism of The Serpent or Snake 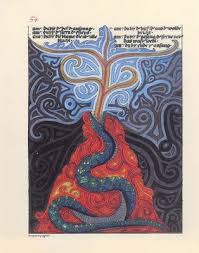 ‘’I have united with the serpent of the Beyond. I have accepted everything beyond into myself…Serpents are wise, and I wanted my serpent soul to communicate her wisdom to me’’

(Jung. The Red Book…image from same)

Jung regarded the Serpent as the most potent of symbols, representing ‘’God’’ or the unconscious. He wore a ring with a serpent engraved on it.

‘’The prominence of the serpent in the mythologies of agriculturally-based societies is a mystery of profound psychological and sociological import…Repeatedly shedding its skin to be born again, the serpent – like the moon that sheds its shadow in rebirth – typifies life energy and consciousness locked within temporal space, delivering and suffering births and deaths’’

(Joseph Campbell. The Transformations of Myths Through Time)

‘’The serpent so often shown wound around the trunk of the tree usually signifies the mind – the power of thought – and is the eternal tempter or urge which leads all rational creatures to the ultimate discovery of reality and thus overthrows the rule of the gods. The serpent hidden in the foliage of the Universal Tree represents the cosmic mind; and in the human tree, the individualized intellect’’

(The Secret Teachings of All the Ages. by  Manly P. Hall)

‘’The Cosmic Tree (expresses) the sacrality of the world, its fertility and perenniality, (and) is related to the ideas of creation, fecundity, and initiation..and to the idea of absolute reality and immortality’’

Trees have given us food, shelter, tools, fuel, medicine, and can be seen as strong, enduring, adaptable, related to fertility and immortality. The axis mundi, often symbolised by a tree, is usually seen as a feminine symbol – umbilical in nature. The Tree of Life represents what Mircea Eliade called ‘’symbolism of the centre.’’(I have to remark, that while both tree and serpent can be considered phallic, both are also equally often associated with the Goddess, and feminine wisdom…)

“As a symbol, the Serpent had as many aspects and occult meanings as the Tree itself; the ‘Tree of Life’, with which it was emblematically and almost indissolubly connected. Whether viewed as a metaphysical or a physical symbol, the Tree and Serpent, jointly, or separately, have never been so degraded by antiquity as they are now, in this our age of the breaking of idols, not for truth’s sake, but to glorify the more gross matter.”

(The Tree of Life – Gustav Klimt)

Meeting place of the Ganges, Yamuna and (the invisible/mythical) Saraswati rivers. It is said to be the place that would not be destroyed in Armaggedon (Pralaya). The Akshayavat (Akshay Vat) is the Sacred Fig tree (or indestructible Banyan) that is said to have survived the Great Flood. Prayag is home to the sacred pool called Bhogabati, home of the serpent Vasuki.

The Sumerian Garden of Paradise (Eden) was home to the Kiskanu (said to be variously the Cedar/Cypress/Palm/Black Pine tree) whose ‘’roots of bright lapis lazuli were planted in the cosmic abyss (apsu), whose position marked the centre of the world’’ (Sayce).

The Cosmic Tree or World Tree was essential to the life of the Shamans.

‘’From its wood he makes his drum; climbing the ritual birch he effectively reaches the summit of the Cosmic Tree; in front of his Yurt and inside it are replicas of the tree, and he depicts it on his drum’’

The Tree connects the 3 regions – Sky, Earth and Underworld. For the Tatars of Central Asia the souls of men perch on the Cosmic Tree like birds, waiting to be carried down to incarnation on earth. During initiation dreams the Shaman is carried to the top of the Cosmic Tree where dwells the Lord of the Worlds (often represented as a (two-headed) Eagle

In Norse myth the world is structured around an axis or pole – the World Tree, the great Ash Tree called Yggdrasill. This mighty tree grows up from the Underworld through nine realms to Asgard, the abode of the Gods. The only creature able to easily climb the Great Ash was a squirrel, who  runs back and forth with messages from the Eagle at its tips, to the Serpent gnawing its roots. Odin was said to have hung for 9 days and 9 nights from the World Tree in exchange for esoteric knowledge.

‘’..all the regions of the world lie under the branches of tre Ash, Yggdrasill, greatest and best of trees, axis of the world. It soars over all that is; its three roots delve into Asgard and Jotunheim and Niflheim, and there is a spring under each. …A Hawk and an Eagle sit in the branches of Yggdrasill,a  squirrel whisks up and down it, deer leap within it and nibble at it, goats tug and tear at its tender roots, a dragon devours it…Yggdrasill always was, and is, and will be’’ 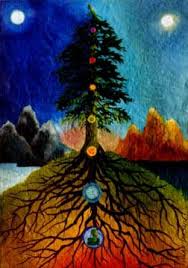 In some versions of the Persian creation story a huge tree grew from the rotting corpse of the first human. The trunk separated into a man and a woman, Mashya and Mashyane, and the fruit of the tree became the various races of humankind.

Traditional Persian and Slavic myths both told of a tree of life that bore the seeds of all the world’s plants. This tree, which looked like an ordinary tree, was guarded by an invisible dragon that the Persians called Simarghu and the Slavs called Simorg.

MICRONESIA
A traditional Micronesian myth from the Gilbert Islands in the Pacific Ocean is similar to the biblical account of the fall from Eden. In the beginning of the world was a garden where two trees grew, guarded by an original being called Na Kaa. Men lived under one tree and gathered its fruit, while women lived apart from the men under the other tree. One day when Na Kaa was away on a trip, the men and women mingled together under one of the trees. Upon his return, Na Kaa told them that they had chosen the Tree of Death, not the Tree of Life, and from that time all people would be mortal. (www.mythencyclopedia.com) 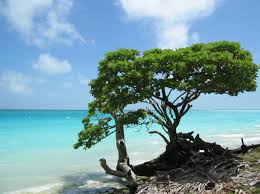 (The Secret Teachings Of All Ages by Manly P. Hall) 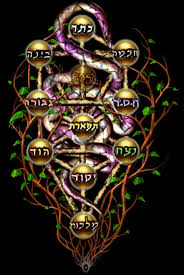 Sakyamuni was meditating under the sacred Bodhi tree, and after 4 weeks it began to rain heavily. Mucalinda the hooded Serpent (or alternatively, a naga or snake-like being) rose up out of the earth and sheltered him. When the rain stopped Mucalinda returned to his human form.

In one version of the Maori Creation myth, Papa (the earth- Mother) and Rangi (the Sky-Father) lived in such a tight embrace that their children were forced to live in the dark, compressed space between them. They clamoured for light and air, and some advocated killing Papa and Rangi. But TANE-MAHUTA, mighty King Tree of the Forests pushed with all his strength and separated them, and thereafter clothed his mother in the plants and trees that make her beautiful, and gave his lonely father the stars and planets to keep him company.

(based on Maori Myths by AW Reed)

‘’Tāne Mahuta is a giant kauri tree (Agathis australis) in the Waipoua Friest in New Zealand…its age is unknown but is estimated to be between 1,250 and 2,500 years. It is the largest kauri known to stand today. Its Maori name means “Lord of the Forest”  (Wiki) 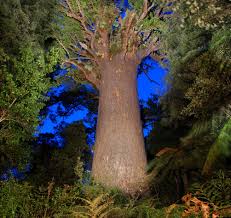 The First couple (after Shu and Tefnut, and Geb(earth) and Nut (sky)) – Isis and Osiris – are said to have emerged from the sacred acacia tree of Iusasset. The various myths refer to primeval mounds or cosmic eggs guarded by (or inseminated by) serpents.

The DYAK Aboriginals of Borneo tell of how in the beginning there was a giant serpent in whose mouth everything existed. Eventually 2 mountains arose – Gold Mountain and Jewel Mountain and out of the clash between these mountains all phenomena appeared. Later, as the Goddess sculpted the land, the Tree of Life manifested, bringing together the upper and lower worlds.

The World Tree (Kien-Mu or Jian-Mu) is the central axis, the link between Heaven and Earth. It is the Cassia tree and is home to the Lord of the Sky (Serpent/Dragon) and the Goddess of Earth.

The Mayan Tree of Life, also known as the World Tree, (Ceiba tree) had its roots in the Underworld (the Place of Fear). A serpent named Kawak guards the entrance to this underworld. The trunk supports the Heavens above the Earth and is where Humans dwell. In ancient Mayan inscriptions the human soul is refered to as ‘’white flower thing’’ (sak nik nal) implying that the soul is the sacred flower of the Ceiba World Tree. Winding through the branches of the tree is the double-headed ‘’Vision’’ serpent, who brings knowledge and power. 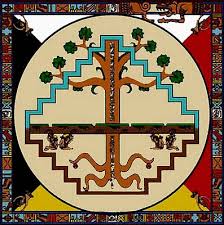 Of course there is also the more familiar biblical Tree of Knowledge and the Serpent, the Sacred Oaks of the Druids, the White Pine of the North American Indians. I’ll keep looking ;)………..

A beautiful MODERN EXAMPLE of the Archetype is the Na’vi’s ‘’Tree of Souls’’ in the movie Avatar and indeed the HomeTrees where the Na’vi live. The locations of the HomeTrees of the clans are always associated with rich deposits of ‘unobtanium’.

One comment on “The Tree of Life and the Serpent”