“You know what truth is? It’s some crazy thing my neighbor believes. If I want to make friends with him, I ask him what he believes. He tells me, and I say, “Yeah, yeah – ain’t it the truth?” 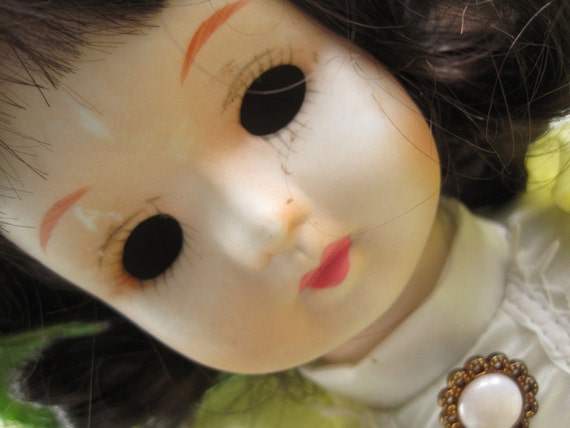 When I was three or four years old I got this amazing doll. A Christmas present, it must have been, though I cannot remember. She had brown eyes and brown hair and she was half the size of me, quite a big doll. For several years she was constant companion. Mary was her name. I dragged her everywhere with me. We had a complex story, an intimate shared history. We had adventures and disasters and she knew the inside of my head better than anyone else on the planet. And I felt likewise that I knew her.

I came to my room one day to find that my brothers had pushed Mary’s eyes into the back of her head with a pencil. I could not believe it. The wave of grief was tremendous; as far as I was concerned Mary was now a corpse. My mother tried to placate me by saying it was not such a big deal; I could get another doll, she said. My Grandmother rolled up the green foil wrapping of my Easter egg into a pair of luminous lime-green balls, and inserted these into the dead sockets.

But even though I carried her around for a few weeks to come, trying to reanimate our story, I knew that Mary was a zombie now, not real anymore, and I stashed her away in the back of the shed. A burial of sorts. A true severance. I grieved for that doll for years. Not always of course, that would be neurotic, but regularly enough, for to me she was wholly real.

I notice nowadays there is a trend for declaring certain things to be real and other things to be unreal, dismissing some things as pathological in some way, while continuing to embrace other things as somehow healthily real. Social media is the new whipping boy of what is illusory. Those who engage are summoning the unreal, apparently, as opposed to those who wriggle into A-line skirts, and totter five days out of seven on high heels to the tube station to travel to work in some busy office where random numbers or information will be fed into computers for God knows what purpose in the supposedly real world.

What happens in social media is an unreal world, apparently. An illusion. Engaging is mocked as being lured by some trans-humanist delusion where reality is projected on screens.

What is laughable, however, is that somehow people imagine that when they look away from the screens they have projected a more real life around them. When this is patently untrue.

We are all fluxes of mental projections and it takes great will to see beyond all the illusion. To escape the net of maya means recognising that the baubles we have parked in your garage, twined around our wrists, or displayed on shelves in bookstores as our opus, are also creatures of our infinite imagination. We have conjured them just as surely as we conjure an electro-magnetic life online. To undermine one without seeing the flimsy nature of the other is to be deluded. Both are unreal. And both are equally real in the limited sense that we intend by our narrow definitions of so-called reality.

Both real and unreal have to be transcended ultimately.

The CEO on his yacht, his billions made on the sweat and toil of invisible slaves,  lives in the midst of a mirage. Bruce Springsteen or Tom Cruise or Beyonce is no more real than us, their glittering constructs are built on the same fine gauze we have created ours from.

Whether its Jujitsu or a swingers party it is not real unless we make it real in our mind.

Some will pass through the arena doors, take one look at grown men sweatily grappling and think ”Meh its not for me”, and the edifice will vanish before they have exited the door. (Or someone will pass through the den of inequity, see his neighbours sweatily groping, and think the same, and that world fades.) Whereas another will go there invested with dreams and projections, cravings, desires aversions and attractions and thus create a real world, as we all do, in every situation in our life

It only takes us finding one lump in the shower in the morning or stumbling suddenly and not being able to spring back up to shatter the  dream reality we have carefully constructed about being healthy and strong and vibrant and engaged in ”such and such” a life. No matter what it is we ”do” in this life, no matter how ”noble” we imagine it to be, it is still an unreal projection of our mind that can be disarmed with a swift tug of the rug,

It takes only one fracking well in the middle of a paradise to shatter the illusion of the idyll for example.

It takes one glancing blow with death to make one wake up and wonder what utter phantasms forty years have been occupied with.

This comparing one unreality with another unreality and saying the second is more feasible or noble or tolerable or worthwhile, is surely pure delusion. It is a way to bolster our totally unreal other life as real. That working and socialising and watching movies and purchasing and eating out in nice restaurants and travelling to exotic locales and having kinky sex and admiring art and attending plays and so on, ad infinitum, is somehow a more real world than any other. When all it is is the sum total of our projected cravings, likes and dislikes, coalesced into a  vision of a life which can be whipped away by the flimsiest of change.

If we want to see the truth of this take all toys away from a child and then watch them begin to invest twigs and stones with animism. Take away our wealth and professional status and see how quickly we will start to invest poverty with meaning. Take away our health and we will invest struggle and death with purport,

So, I guess what I am suggesting is that Mary was as real as anything else. And those adults who told me she was not, that she had no inherent meaning, were speaking in error. For where is the edge of the dream?

‘‘Reality is merely an illusion, though a very persistent one.”